When I’m immersed in an excellent book or series, I usually end up visualizing the characters in my head (like a loon!😋) so I thought it’d be fun to give some of my favorite characters a famous (or not) face!

I have been DEVOURING anything by Jennifer L. Armentrout, she’s my newest unicorn author! In fact, I’m forcing myself to put aside her books for a few weeks so I can squeeze in some other books I’ve been wanting to read…but only for a bit because I’m already feeling withdrawals, LOL! 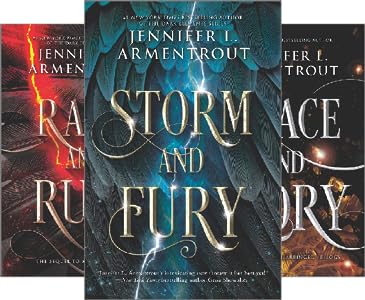 by Jennifer L. Armentrout (Author)
From Book 1: “Jennifer L. Armentrout is a master of weaving rich contemporary realism with magic and mayhem. Her characters will grab hold of your heart and refuse to let go. Every page left me wanting more.”—New York Times bestselling author Brigid Kemmerer

BOOK ONE IN THE NEW YORK TIMES BESTSELLING HARBINGER SERIES

Meet Trinity Marrow, a girl with an explosive secret whose hiding place has just been discovered…

Eighteen-year-old Trinity may be going blind, but she can see and communicate with ghosts and spirits. Her gift is the reason she’s been in hiding for years in a compound guarded by Wardens—shape-shifters who protect humankind from demons. If the demons discover the truth about Trinity, they’ll devour her to enhance their powers.

When Wardens from another clan arrive with reports that something is killing both demons and Wardens, Trinity’s world implodes. Not the least because one of the outsiders is the most annoying and fascinating person she’s ever met. Zayne has secrets of his own—but working together becomes imperative once demons breach the compound and Trinity’s secret comes to light. To save her family and maybe the world, she’ll have to trust Zayne. But all bets are off as a supernatural war is unleashed…

The Harbinger Series:
Storm and Fury
Rage and Ruin
Grace and Glory

Can’t get enough of Zayne? Read about his past in The Dark Elements series:

The part of me that was human came from my mother. Every time I looked in the mirror, I saw her staring back at me. I got my dark hair and brown eyes from her, as well as the olive skin tone courteous of her Sicilian roots. I also had her face. Big eyes. Maybe a little too big, because I could make myself look bugged out without much effort. I had her high cheekbones and small nose that curved slightly to one side at the end. I also had her wide, often expressive mouth.

I couldn’t see the blond’s face yet, but goodness, he was tall, around six and a half feet, and the black thermal he wore stretched across broad shoulders. His shoulder-length hair was pulled back and secured at the nape of his neck.

He was beautiful. And that was saying something, because I was constantly surrounded by gorgeous Wardens who rocked some great DNA when they appeared human. His skin was golden, like he spent a decent amount of time in the sun. He had a strong jaw that looked as if it were carved from stone, and those lips… How could they look so soft and so hard at the same time? And wasn’t that a weird thing to notice, but I so noticed, which probably meant I was veering into creepy territory. High, angular cheekbones matched a straight, proud nose. I was too far away to see his eyes, but I assumed they were like all the other Wardens. The deepest, brightest blue possible. From where I was standing, this Warden looked like he was only a few years older than me, and he reminded me of the many painted angels that covered the ceiling of the Great Hall—paintings I could no longer see in detail.

How did I do? Did I come close? Have an amazing day y’all!💜