Sometimes it takes an outsider to force us to see who we are. The real struggle is accepting what we learn. For Beverly Townsen, nothing could be closer to the truth. Virtually a shut-in, Beverly has pulled back from Green Valley’s community, preferring the isolation of her farmhouse and her daily routine of viewing home improvement television shows. When the opportunity arises for her own home improvement and a personal re-assessment, she’s not so excited about the reality of real life versus DIY programs.

Jedd Flemming understands physical pain and personal loss, but it’s never stopped him from bucking forward in life. A former military man and rodeo star, his life as a nomad comes to an end with false accusations and a family matter back in the Valley. It’s been a long journey to find his way home and once there, there’s nothing he wants more than to reclaim what he’s lost…and maybe the elusive female reclusive who holds a sliver of his past.

With an unprecedented proposition, Beverly finds a stranger living in her barn, raising horses on borrowed pastures, and plowing his way into her vacant heart. Old hurts linger, but sometimes love in deed is louder than words.

‘Love in Deed’ is a full-length contemporary romance, can be read as a standalone, and is book #6 in the Green Valley Library series, Green Valley World, Penny Reid Book Universe.

Download your copy TODAY! Read for FREE in Kindle Unlimited!

Love in Deed by L.B. Dunbar

Love in Deed is book 6 in the Green Valley Library series but no worries, you can jump in without being lost as it’s a standalone!

At just 45 years old, Beverly (Bee) Townsen has become a recluse, depending solely on her daughter, Hannah. Her disability and her bitter past have morphed her into a scathing woman with a sharp tongue. So when Jedd Fleming comes to her farm to make a deal, Beverly is less than pleasant. But there’s something about the silver fox that makes Beverly want to change. Can Jedd break through her walls to find the real woman underneath?

I’ve enjoyed several of these over forty romances from L.B. Dunbar and this one, again, didn’t disappoint! Beverly, I’ll admit, was hard to like at first. She was so mean. But of course, there’s a reason for her bitchy-ness and after a few chapters, she grew on me. And then I was watching her character grow, evolve and turns out…I wanna be like Bee when I grow up! I had to admire her tenacity and the strength she needed to pull herself from her self imposed exile. Let’s not forget the silver hottie, Jedd though, because he really was the impetus behind Bee’s breakthrough. He never wavered from his feelings for her and he never let his own disability hold him back. Swoon!

This one is an easy drama, small town romance with gorgeous characters and just a dash of humor. It’s an inspiring little gem to scoop up for an afternoon read! Told from dual POVs with a sweet ending. I voluntarily read and reviewed this book. 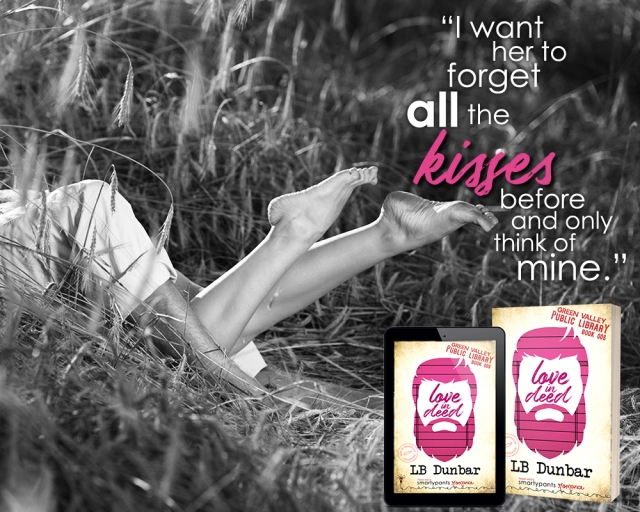 “Momma,” she whispers, and I turn at the soft question in her voice. Her eyes scan my face. Does she fear she’ll look like me one day? Those bright eyes will dim, and lines will form in the corners. Will they be rivers formed from tears, or will she eventually find laughter? Does she wonder if her lips will match mine, permanently curled downward? Can my girl still smile? Will her hair go gray too young as mine did? Will the stress of her life turn her into someone lonely and lost?

I blink back the tears fighting for release. I won’t cry. Nothing left to cry over. It’s all gone.

“Do you fancy him?” my daughter asks, and I choke on the question.

“What…? I…of course not. Don’t be silly. I’m sure he’d be more interested in the likes of you.”

“I’m sure I don’t need to explain the birds and the bees to you. Men like him only want young things and only want one thing from those young things. I don’t think he should stay here,” I sneer, recognizing the pulse at my neck and the thump of my heart. My daughter is a pretty girl, and this older man could be attracted to her for all the wrong reasons. Young girls go for older men to solve their daddy issues.

“He’s sleeping in the barn,” Hannah counters, her voice deepening in displeasure. Ticking off points on her fingers, she continues, “We don’t need to feed him. He’ll rebuild at his expense or hire what he can’t do himself. The back field will be plowed and prepped for spring planting.”

I snort in response, but my eyes return to Jedd’s movement. Into the barn. Out in the yard. My observation traces down his perspiring spine to the waist of his pants where his shirt has untucked. My fingers curl on the armrest of the rocker as my eyes outline the fine globes accentuated by those smooth pants. My mouth goes dry.

What is it about this man? Why am I suddenly lusting after him?

I can’t. That’s the bottom line. I can’t anything him. Under fifteen percent and tight pants and a perfect backside is still a man with empty words.

My eyes fall blindly on the reality television program. The only man a girl can count on is the fictional kind. I force my attention away from the barn, but my eyes seem to have a will of their own.

“We can’t have a stranger living in our barn,” I huff. Jedd stops, turning in his tracks with a pile of lumber on his shoulder as if he heard me, which is impossible on two counts: the panes of glass and his lack of hearing. Still, he stills, and his eyes narrow on the house as if he knows I’m watching him, I’m talking about him, and I don’t agree with this arrangement.

“Too late. He’s moving in.” Hannah definitively nods, dismissing my opinion as Jedd swings back around. She leans down to kiss my cheek and then exits my room, but I remain transfixed.

My eyes continue the cat and mouse game of watching Jedd disappear and then reappear. I don’t know how much time transpires, but eventually, the bed of his truck is empty. Still, I hold my breath as if the barn is a giant octopus, swallowing him whole. I fear he might disappear forever like Howard did, which is the silliest thought I’ve had in a decade. I don’t need Jedd. We don’t need Jedd. There will be no attachment to him.

But then, Jedd appears at the open barn door and gives a single wave toward the house, and I smile in spite of myself.

L.B. Dunbar has an overactive imagination. To her benefit, such creativity has led to over thirty romance novels, including those offering a second chance at love over 40. Her signature works include the #sexysilverfoxes collection of mature males and feisty vixens ready for romance in their prime years. She’s also written stories of small-town romance (Heart Collection), rockstar mayhem (The Legendary Rock Stars Series), and a twist on intrigue and redemption (Redemption Island Duet). She’s had several alter egos including elda lore, a writer of romantic magical realism through mythological retellings (Modern Descendants). In another life, she wanted to be an anthropologist and journalist. Instead, she was a middle school language arts teacher. The greatest story in her life is with the one and only, and their four grown children. Learn more about L.B. Dunbar by joining her reader group on Facebook (Loving L.B.) or subscribing to her newsletter (Love Notes).