Theirs was a forever kind of love, until it was stolen.

Been There Done That, an all-new second-chance romantic standalone by debut author Hope Ellis, is available now!

ZORA LEFFERSBEE’S once perfect life is no longer perfect. Her tenure at the University is in question, funding for her employees uncertain, and her faux-fiancé, Jackson James’s unpredictability is wearing on her last nerve. Just when Zora is convinced things can’t get more complicated, life proves her wrong.

What the heck is he doing here?

NICK ROSSI’s complicated life is still extremely complicated. He’s used to fighting for everything he has, but he’s also used to winning. Now a man of power and influence, his return to Green Valley after so many years hasn’t gone according to plan, especially with the woman he’s always wanted.

A powerful woman intent on righting the wrongs of the world, Zora doesn’t have time or energy to deal with the man who broke her young heart.

A powerful man intent on righting the wrongs of the past, Nick can’t help wanting to protect Zora, even if his devotion is unrequited.

‘Been There Done That’ is a full-length contemporary romance, can be read as a standalone, and is book #1 in the Leffersbee series, Green Valley World, Penny Reid Book Universe. 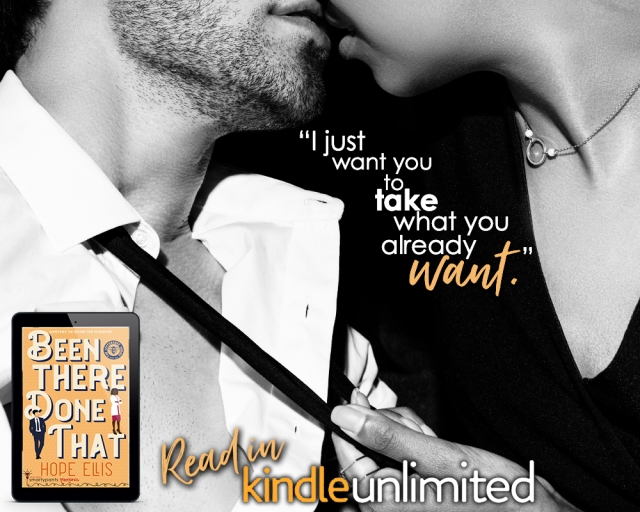 Download your copy today or read FREE in Kindle Unlimited!

My Grandmother Leffersbee used to say, “Life isn’t perfect, but that’s what makes it so interesting.” Then she’d wink before adding, “Do you want interesting? Or do you want boring?”

Right now? I could use some boring perfection. Just a little. Just a smidge. Please.

“Zora.” A vaguely familiar-sounding voice said my name from someplace in the vicinity of my office doorway. I ignored it, hoping they’d take my silence as an invitation to go away.

You’re almost out of time.

My eyes stung, but I wasn’t going to cry. There is no crying in clinic communication research; there is only more research, more grant applications, more trying, more doing. But, damn, I really thought we had this one in the bag. Folks’ livelihoods depended on it. My tenure, my job, depended on it. Not to mention the research itself was important—so incredibly important.

Given my present state of mind and eau de sweat fantastique, I can’t help barking out, “Now isn’t a good time.”

The man didn’t respond for a beat, but then once more said, “Zora,” this time with a hint of grit and impatience.

My glare cut away from the offending rejection email and I opened my mouth to volley something scathingly polite and dismissive, but then every nerve and muscle in my body seized. The clouds outside my office window parted at that very moment, emitting a biblical shaft of light that illuminated my overstuffed bookcases—and the breathtaking specimen of man standing in my office doorway on the fifth floor of the medical research building.

Shock choked me. I couldn’t breathe. The cracked vinyl of the office chair’s armrests bit into the tender flesh of my palms.

I recognized him immediately even though he looked very, very different. All the awkward lankiness and unformed promise of his youth had been ruthlessly fulfilled in the intervening years. But after twelve years of empty, aching absence, of wondering and worrying, of resignation and sadness . . . he was here.

“I thought . . . I thought you were dead.” The whispered words left my mouth at the same time they formed in my brain.

The width of his shoulders filled the doorway, leaving scant space between his head and the door frame. I couldn’t help devouring the sight of him, half-wondering if he were a mirage. Despite being as fashion challenged as I was, I easily identified the perfect fit of a bespoke suit, noting how the high-quality fabric closely followed the muscled bulk of his shoulders and arms. The unassuming dark jacket, white dress shirt, and trousers did little to hide his tapered waist and well-developed thighs.

His hulking presence alone ensnared my attention, but his face arrested it. He was striking. Thick, ink-black hair just starting to curl over his collar matched the dark stubble shadowing his square jaw. His slightly off-center nose, likely the result of a break, ruined the pure symmetry of his features. But his eyes were a startling shade of green, the same showy, verdant hue of summer leaves under an ominously gunmetal sky.

So unsettlingly familiar. And yet . . . No, it couldn’t be him. There was no way it was Nick. Not after all these years.

I lurched up and made a spectacle of myself as I struggled to stand. Panic weighted my feet. Disbelief severed any connection with my brain’s higher processing, leaving me stuck to my chair with my mouth hanging ajar. “Letting in flies,” as my Grandma Leffersbee would have said.

His mouth moved, like maybe he was going to introduce himself. But instead, he repeated my name for a fourth time, “Zora . . .”

This voice was different from the Nick I had loved. Deeper. But the way he said my name, slowly, as if savoring the taste of something rich? I could never forget that.

Hope Ellis is a health outcomes researcher by day and writes romances featuring sexy nerds by night. She hopes to one day conquer her habit of compulsively binge-watching The Office.