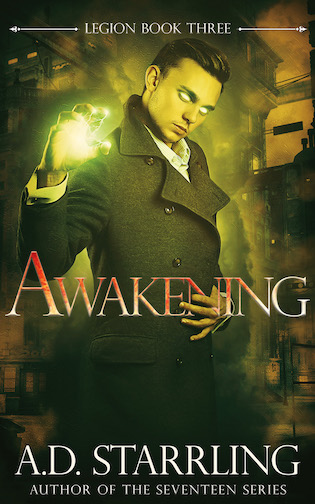 “If you’re a fan of Jim Butcher and his Harry Dresden series, you will more than likely LOVE this new series!” ★★★★★

Several months after discovering the real reason behind his mother’s confinement to a psychiatric hospital and her eventual death, Otis Boone is at a crossroads. With the Vatican’s experts still unable to translate her journals, he goes on a desperate search for someone who can help him decipher the hidden code in her writings. After hearing a rumor about a mysterious collector, Otis persuades Artemus Steele and his group of unearthly housemates to accompany him to Salem. But the arcane bookstore owner they meet is even more mystifying than they expected.

Sebastian Lancaster has spent the last two centuries trying to forget the awful night a monster invaded his home and slaughtered his family. When Artemus and his allies break into his bookstore and inadvertently bring a horde of demons with them, Sebastian finds himself thrust into an adventure he never wanted. Fate comes calling when he crosses path with an enigmatic Theology professor and events unfold that neither he nor Artemus could have anticipated.

As they race against time to save one of their own, Artemus and Sebastian must put aside their differences and work together to track down a demon hideout in England. But Sebastian is hiding a secret. One that has the potential to bring Hell to Earth.

From the author of bestselling supernatural thriller series Seventeen comes a spin-off series like no other. If you like Jim Butcher, Ilona Andrews, Patricia Briggs, Nalini Singh, Karen Marie Moning, Christine Feehan, Shayne Silvers, Shannon Mayer or K.F. Breene, then you’ll love Legion, the new series in the Seventeen universe. Grab this spellbinding book and enter a world you won’t want to leave!

It was the scream that woke him. The boy bolted upright in the four-poster bed, the sheets crumpling to his waist. He blinked before looking dazedly around his bedroom, the remains of his nightmare fading to wisps of darkness in the night. Moonlight washed through the leaded windows of the Victorian mansion in bright beams, illuminating the empty chamber around him.

For one wild moment, the boy wondered if the sound had been part of the terrible dream he’d been having. The same dream he’d experienced every night for the past month. The one where monsters dwelled.

The scream came again. This time, it spoke of unspeakable pain and terror.

A whimper left the boy’s lips when he recognized his mother’s tortured voice.

There was no longer any doubt in his mind. This, whatever was transpiring on this cold winter’s night, was no dream.

The boy’s eyes widened as his father’s horrified yells echoed down the west wing hallway.

He scrambled out of bed and stood frozen for a moment, the cold floorboards beneath his feet sapping away what little warmth remained in his body. His gaze found the poker by the fireplace.

The dying embers in the hearth painted a macabre red glow across the metal.

The boy walked over on trembling legs and closed his hand around the handle, his pulse racing with fear. More voices reached him.

His sisters were sobbing and begging, their tones rising with every desperate word they uttered, their panic so thick it paralyzed him once more. They stopped abruptly, their pleas cut off by a grisly, fleshy sound.

Deathly silence fell upon the mansion. The boy waited, mouth dry and heart pounding so fast he feared it would leap from his chest.

The noise that came next caused his bladder to loosen. Warm wetness pooled between his legs as an inhuman shriek tore through his home.

It was the same sound he’d heard the monsters in his nightmares make.

A heavy footfall made the floor tremble. Something was coming down the hallway toward his room. Something big. Something that scratched the wood with every wicked step.

A shadow appeared across the gap beneath his bedroom door. The floorboards dipped slightly as the monster stopped outside.

The boy took a step back. A gasp whooshed out of him as he slipped on his own urine and landed heavily on his backside.

A scraping noise danced across the outside of the door, the sound setting the boy’s teeth on edge even as he scrambled desperately to his feet.

“Fie, foh, and fum,” the monster growled, “I smell the blood of an Englishman.”

Tears overflowed the boy’s eyes and ran down his icy cheeks. He swallowed the sobs rising in his chest.

His family was dead. He knew this without question.

And the monster who had murdered them, the one from his darkest nightmares, the one now standing outside his room, was going to kill him too. Terror and despair swamped him, a heavy mantle that weighed his small body down. His shoulders sagged. His fingers loosened around the poker.

There was no point fighting his fate.

The boy blinked, the monster temporarily forgotten. Before he could fathom the eerie throbbing he’d just sensed inside the very marrow of his soul, the bedroom door exploded inward in a cloud of deadly shards and splinters. A cry left him, unbidden.

The monster appeared through the falling debris, reeking of death and rotting flesh. It was over six feet tall, with a hulking physique, its hands and feet tipped by wicked, blood-soaked talons. Its eyes were black but for their yellow centers.

The boy registered the gore and gristle coating the monster’s lower face and realized he was looking at what remained of his parents and sisters. Rage erupted inside of him then, so sudden and so fierce he almost gasped with the force of it.

There was no time to explore the heavy beat that was matching his own frantic heart or the uncanny warmth rising from the depths of his body. The boy widened his stance and gripped the poker in white-knuckled fists, the fury he was experiencing echoed by something inside him. Something that he knew instinctively was not of this world.

Gone was the crippling fear that had gripped him a moment past. In its place was deadly determination.

Heat bloomed on the boy’s right palm. Though he caught a faint glow between his fingers out the corner of his eye, he did not dare look away from the monster who had just stepped inside his room.

To do so would be to invite instant death.

The boy and the monster stared at one another for a frozen moment in time. In the monster’s obsidian eyes, the boy detected surprise and a hint of interest. The monster smiled, its features twisting in a ghastly grimace of loathing and hunger. It rushed toward the boy, its movements so swift he almost missed its charge. 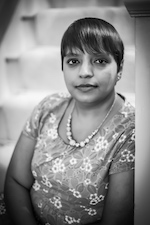 AD Starrling’s bestselling supernatural thriller series Seventeen combines action, suspense, and a heavy dose of the paranormal to make each book an explosive, adrenaline-fueled ride. Her spin-off urban fantasy series Legion has been compared to Jim Butcher’s The Dresden Files. If you prefer your action hot and your heroes sexy and strong-willed, then check out her romantic military thriller series Division Eight.

When she’s not busy writing, AD can be found eating Thai food, being tortured by her back therapists, drooling over gadgets, working part-time as a doctor on a Neonatal Intensive Care unit somewhere in the UK, reading manga, and watching action flicks and anime. She has occasionally been accused of committing art with a charcoal stick and some drawing paper.