Make no mistakes about it. I know what I look like to others. Young, government-aided, pregnant mom. They see Lucy on my hip, and they see a mistake. I mean, why else would someone have a child so young, right? They couldn’t be more wrong. I’m too busy most days between parenting, work, and finishing up my last year of nursing school to let their judging gaze tear me down until he moves in the vacant house next to the apartments I live in.

His cold, blunt observation of us doesn’t differ from any other stranger. He doesn’t know me, but he’s already painting a picture of who he thinks I am in his mind. He judges my very round belly, Lucy’s inability to leave him alone, the bags under my eyes, and the fact that I can care less what I look like anymore.

He’s a rude guy. Stays that way for months too. Then something happens, I’m not even sure what. Judgmental Guy decides Lucy and me—as well as baby Eli, are worth his friendship.

Turns out, Judgmental Guy isn’t too mean—okay, he kind of still is. But he graduates to Elijah. I build an unlikely friendship with him which deems it necessary for him to start smiling around me and my kids.

I’m wrong again. Elijah isn’t rude. He’s terrifying. His strange acts of kindness are unraveling me. Elijah is only my friend.

There was a moment of panic. For a second, I couldn’t see any Funyuns. I realized why. There was only one bag left, and it was partially hidden by all the Lay’s chips next to it. I nodded and smiled as if to say, “It’s all good” when two little hands shot up and snatched the bag before I could.

“Whoa,” I said, staring down at the blonde pigtails.

She slowly turned, peered up, and arched her brow at me curiously. “Are you talking to me?” The kid couldn’t be more than three and there she was completely alone and stealing my damn Funyuns!

“How about you give me those Funyuns?” I asked nicely.

She stared down at the chips in her tiny grip—those were mine—then looked back up. “No. Get your own.” She turned to walk off.

“Where’re your parents? Little shits shouldn’t be all alone even if they’re becoming lil’ thieves at such a young age.”

She scowled, her tiny nose wrinkling up. “She’s right where I left her.” She pointed to a blonde head leaned over one of the freezer sections. The little girl was inspecting me when I glanced back down at her. I saw the way her eyes rolled over my arms before she frowned. “My papaw always tells my mom that tattoos are ugly on women.”

Her mouth fell open. “You have demons on your arms ’cause you’re one.”

I jumped and hissed. She startled, dropped the Funyuns, and ran screaming to her mom. I bent down, picked up my chips, and chuckled as I walked over to the next aisle and grabbed a pizza—something I could at least heat up easily—then went to the checkout where ugly grandpa’s evil thief helped her mom unload their shopping cart items.

Lil’ Thief gazed up, eyes widening then hardening as tough as one could look at her age. She saw the bag of chips in my hand and tapped her Mom’s side “Mom, mom,” she started.

“What is it, Lucy?” Her mother asked as she grabbed her purse and wheeled the cart forward as the cashier rung up her items. I took in the greasy blonde hair tucked into a messy bun. It probably had been a day or two since she shampooed it. From her chipped nails to her pale, tired face without makeup it was obvious she didn’t give two shits about her appearance. The longer I watched her, the more she irked me. I exhaled loudly as I imagined her living off the government. In a matter of minutes, she’d slide an EBT card through the slot to pay for her items.

Guilt washed over me. My ma had been in this shape while raising me, and most of the food on our table before she met Hank came from food stamps, yet I saw more people abuse the system, so my disdain was real every time I saw people like this one in a store.

No one was like Ma. She was her own breed, and she’d hang me for my petty thoughts, but I couldn’t stop myself.

“That demon worshipper stole my chips.”

Fucking hell. I went from the dude with demons on my arm to demon worshipper real quick. I’d hate to see what this child would have to say about my shops—creepy, demon portraits everywhere. The horror!

The mother’s head snapped up from her purse at her child’s voice. She peered around to where her daughter pointed—at me—before turning a pitiful shade of red. Her eyes were the brightest shade of blue I’d ever seen, or maybe it was because she was so pale and sickly looking. She blushed so hard it made her extremely noticeable.

“Lucy, that’s not nice! Why would you say that?” She wiped her face and tried hard not to stare at me as she spoke to her daughter.

“He stole my Funyuns!” Her daughter’s face was red too. Quite the match, the two of them.

The mom raised up, face squinted in pain as she placed her palm on her back, and that was when I noticed—holy, why hadn’t I noticed before? The woman was very pregnant. Just what society needed—another little terror running wild. She gestured toward the small chip bags beside me. “Grab a bag so I can pay. And apologize for saying that.”

The little girl scooted around the shopping cart and snatched a small bag of Funyuns before turning around to me. “Sorry.” She stuck out her tongue as she glared up at me from a perfect angle where her mom couldn’t see it. Sneaky.

“You should really get a hold on that,” I couldn’t point at the kid with my hands so full, but I jerked my head toward it so that she would

understand I was talking about her kid.

“That?” The mom’s eyebrows went up a notch. She forgot the part where she was trying not to make eye contact with me as she frowned.

“Right, kid,” she told me. “Not that.” She glanced down at her daughter. “Come on, Lucy. Step away from the bad man.”

I scoffed. “I guess that’s better than demon worshipper.”

She straightened up and glared at me. “Would you prefer it if we called you the devil?”

“Suits me.” Kids had no hope of not being little shits when their parents raised them to be just as uptight. I bet she’d love to hear the name of my shops as well.

She scowled and turned around to pay. It surprised me when I saw a debit card slide through the machine. So she had a man she lived off? Popping out babies just to keep him? You’d think she’d at least take better care of herself. “What?” she muttered when I was still staring at her.

I shrugged, unbothered. She closed up her purse, hollered for her kid again before waddling out the damn door.

I dropped my stuff, slowly covering my eyes with my hands. What just happened finally sunk into my thick skull. I stole a kid’s chips. There was no end to my assholery.

It was a five-minute drive from the grocery store to my new house. The one thing I hated about the place I bought was that it was right next to the projects. I would likely hear all kinds of shit I didn’t want to, but I got a great deal and the house was amazing. Or at least Ma thought so, she was the one that decided for me. I would live in it and pay for it but it didn’t matter what I thought. Apparently, anyway.

I really needed to stop letting her boss me around.

I could almost hear her saying that she’d stop after I found someone else to do it as I pulled into the driveway. Grabbing my grocery bags, I exited the truck. Before I could lock up, I heard a noise from the apartment lot next door.

“Lucy, I’m gonna need your help with these.”

Who knew why I walked around my truck to see when I’d recognized the familiar voice. The woman from the store was helping Lil’ Thief out of a car seat. The moment the kid’s feet hit the concrete, it was like her demon detector turned on. Her eyes darted around before landing on me. 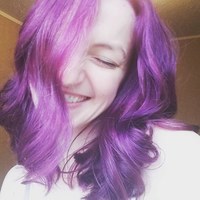 Michelle is from a small town in Eastern Kentucky where opossums try to blend in with the cats on the porch and bears are likely to chase your pets—this is very true, it happened with her sister’s dog. Despite the extra needed protection for your pets, she loves the mountains she calls home. She has a man and twin girls who are the light of her life and the reason she’s slightly crazy.

As a kid, she was that cousin, that friend, that sister and daughter, the talker who could spin a tale and make-believe into any little thing so it was no surprise when she found love in reading, and figured all these characters inside her head needed an outlet. They wanted to be heard, so she wrote.

The voices keep growing faster than she gets the time to write.

The stories are never going to end. That’s perfectly okay, though. We never want to stop an adventure.