Blurb
From New York Times bestselling author Aurora Rose Reynolds comes a flirty romantic comedy of big love and second chances.
Courtney Williams wanted forever. She got six years of empty promises, a divorce, and a well-deserved settlement that’s paid her way to Manhattan. She has a new home under renovation, a new job, and a do-over as a happy “single in the city”—until she meets an architect with designs on more than her beams. He’s also a devoted single dad, a great cook, and has dark lashes to die for. Too good to be true. Now all Courtney can do is whisper, Oh no, not again.
Divorced Lucas Fremont isn’t looking to get swept away. But how can he not with a woman this sweet and sexy? She’s making his broken heart beat fast. His sister-in-law, Fawn, says go for it. But as cautious as Courtney is, Lucas has to do more than that. He has to fight for it. Now all he can do is think, Don’t let this one get away.
But Courtney comes with a secret. And Lucas comes with a bitter ex. If love is to stand a chance, they’re going to have to take a chance.
ADD TO GOODREADS

DRAWN INTO LOVE is book 4 in the Fluke My Life series and though it follows a family with four brothers, it can stand alone.

Courtney Williams is starting her life over after a bitter divorce. New job, new house, new city. She finds herself immediately attracted to the interior architect that she hires to fix up her new house. Lucas Fremont is also divorced but he’s a single dad to the adorable Maddi. He wasn’t looking for a new mother for his daughter but meeting Courtney is a twist of fate that he readily accepts.

I’ll start by saying that this one is a bit predictable. The exes for both Courtney and Lucas make a general nuisance of themselves but they’re able to power through and continue to build a new life despite the exes butting in! (Can that be considered a spoiler? Sorry if it was!) Anyway, having said that, I was still enamored by these two characters, three if you count little Madeline. Besides the ex interference, there’s some drama between Lucas and Courtney but I don’t feel like it was overwhelming or over the top, really just two people trying to mesh their lives together. Lucas wasn’t expecting Courtney but he definitely embraced a relationship with her. I just adore the single dad trope, there’s something so sexy about a man who seizes fatherhood! And Lucas WAS sexy and determined to keep Courtney. He was alpha in a subtle way. Courtney was understandably afraid to take the leap but I think she pulled it together in the end and I was delighted with the way this one wrapped up.

Told from dual POVs with a happy ever after. I voluntarily read and reviewed this book. 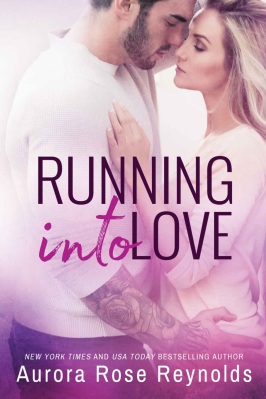 Aurora Rose Reynolds is a New York Times, USA Today and Wall Street Journal bestselling author whose wildly popular series include Until, Until Him, Until Her, Underground Kings and Shooting Stars.
Her writing career started in an attempt to get the outrageously alpha men who resided in her head to leave her alone and has blossomed into an opportunity to share her stories with readers all over the world.
Author Links