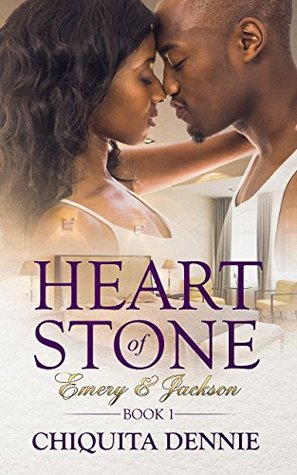 Emery Stone has a secret. If all goes as planned after she leaves her cheating ex-boyfriend, she can make sure no one ever finds out. Determined to keep love at bay, she’s resigned herself to a life of no strings attached, but just as she settles on her new loveless path, her heart is put to the test – again.

Jackson Pierce is all for a good time with a gorgeous woman, but Emery isn’t like other women. For the first time in a long time, he’s found someone he can’t stop thinking about and can’t wait to get to know better. The only problem is she’s built walls around her heart and no amount of promises or long, lust-filled nights will convince her to let him get closer.

As Emery and Jackson try to find a balance between what they want and what they need, they find themselves up against people from their past and forced to face the truth, no matter what the cost.

Is their relationship strong enough to survive the obstacles life places in front of them?

Heart of Stone
by Chiquita Dennie

Series
Heart of Stone Book One

“Thanks. Emery are you okay? You look a little flushed,” Jordan asked.

“Oh look, Brent’s here eating with that guy you were staring at Emery.”

“I wasn’t staring at anyone, Jordan.” I told.

Turning my head, I noticed the gentleman pointing at our table and Brent looking over at us and smiling. He stands up and walks over to our table with a mystery man behind him.

“Dammit,” I muttered out.

Throwing my napkin at her playfulness, I flipped her the middle finger and fixed myself up before Brent approached with his guest. Why I was doing all I couldn’t say. I was still heartbroken over Anthony’s lying and cheating.

“Well, if it isn’t my best Account Executive, Emery Stone, out to dinner with her two best friends, Jordan Davis, and Angela Jones.”

Angela had me in disbelief with my mouth agape at her words. Watching her snicker with Jordan and Brent, the mystery guy continued to stare at me.

“Ignore her, Brent. Hi, I’m Jordan Davis, and this is Angela Jones and from the heat radiating off you two, this is Emery Stone,” Jordan shakes mystery guy’s hand.

“This is Jackson Pierce, an old friend. Jackson’s my boy from back home. We grew up together, and, we went to separate schools and met back up a few years ago after his divorce.”

Hearing Brent says Jackson is divorced gave me butterflies in my stomach.

“Pleased to meet you, Emery Stone.” Jackson extends his hand out for me to grab.

Something inside me hesitates for a second.

“Ni…Nice to meet you as well Jackson,” I stuttered out.

He smiled at my misstep and continued holding my hand and rubbing his fingers against my knuckles. I arched my brow and caught the entire table watching us.

Jackson bit down on his lower lip and raised my palm to lips and placed a soft kiss on the back of my hand. I rose fast out of my seat., the throbbing between my thighs rose, and I felt the sexual heat between us. Thinking clearly and remembering were in front of other people. I needed to focus on something else before ending up on my back with my legs wrapped around his thick, muscular thighs. God wouldn’t be that cruel and let this gorgeous guy walk around with a little dick.

“I wasn’t planning on it, Sweetness.”

“Oh, I like you, Jackson. Do you have a brother or an uncle by chance?” Angela blurts out.

Brent narrows his eyes at Angela, and she shrugs her shoulder in exasperation. I wonder what’s going on between those two.

“Angela, don’t get your feelings hurt. I suggest you keep your eyes on that menu before you get in trouble.

Jordan and I pause at Brent chastising Angela in public. They’ve always had a fiery friendship, and with me working for him and her as my best friend, I often find her coming to my job to hang out. I can’t have a screaming match.

“Brent, you’re not my daddy, boyfriend, husband or boss. I don‘t need your suggestions this way. Now, Jackson, as I was saying,” Angela stated.

Jackson pats Brent on the back and calms him down as he inches closer to Angela.

“How about we order dinner? Brent would you like to join us?” Jordan suggests.

“Bye Brent,” Jordan and I replied.

He walked away, ignoring Angela. She sat with her arms crossed and lips turned up in a pout.

“Is there something I should know about, Angela Jones?”

“Please tell me you’re not sleeping with Brent.”

Sitting back down in my seat, I leaned back and relaxed from the built -up tension in the room.

“Bitch, you slept with him at my baby shower! Are you crazy?” Jordan screamed.

“What, don’t act like you tramps don’t have an itch that needs scratching every blue moon.”

“Angela, there’s a difference between an itch and a fuck buddy,” Jordan said.

“Are you and Brent in a relationship?”

“Hell, no. We kept what we have between us. So don’t you go running your mouth, Emery Stone. Brent and I are friends and we sleep together.”

“So, he sleeps with other women and you’re okay with that?” Jordan asked.

“Yep,  like I sleep with other men.” Angela replied.

“Well, he may get lucky tonight. The women are throwing themselves at him right now. He’s pulling his phone out. Bet he comes in late tomorrow, Emery.” Jordan answered.

Angela stood up out of her seat, knocking her water over the table. She shrieked as it splashed onto her dress.

“I thought you weren’t in a relationship, Angela.”

“We aren’t, he can get any slut’s phone number. I mean if he wants to catch a disease by all means get her number. She looks like a man, anyway.” Angela said

We all burst into laughter and asked the waiter to bring another glass of water and some wine to our table.

“So, Emery, how is Granny doing?” Jordan asked.

I pick around the olives in the arugula salad. Food has always been a weakness. I’ve started this new vegan lifestyle change. Not sure it’ll last long because I love cheese too much.

“I left her with my mom earlier. Her blood pressure and cholesterol is up. You know Granny Lynn don’t stay on top of her health. She loves 3 things in this world besides her family. Soul Food, cigarettes and rum and Coke.”

“That’s true, I remember at the last family dinner. She made this mac and cheese that stuck with me for days after,” Angela responded.

“For what it’s worth, she still looks good for a woman in her seventies. Her shape is bananas, why Jackson Pierce hasn’t taken his eyes off you, Emery, since we’ve sat down,” Jordan told.

“If you don’t want him, Emery, I’ll take him off your hands. Add to my roster of fun.” Angela smirked.

Turning around slowly trying to play off Angela’s comment, I caught Jackson staring right at me. I smiled back and turned around with Angela and Jordan peering deviously.

To celebrate the tour for HEART OF STONE by Chiquita Dennie, we’re giving away one ebook copy of the book & a $25 Amazon gift card!

GIVEAWAY TERMS & CONDITIONS:  Open internationally. One winner will receive a ebook copy of Heart of Stone by Chiquita Dennie & one winner will receive a $25 Amazon gift card.  This giveaway is administered by Pure Textuality PR on behalf of the author. Giveaway ends 12/3/2018 @ 11:59pm EST. Pure Textuality PR will send the $25 Amazon gift card, and Chiquita Dennie (or her staff) will send the winning ebook copy out to the winner directly. Limit one entry per reader.  Duplicates will be deleted.  CLICK HERE TO ENTER!

CHIQUITA DENNIE is an Author and Entrepreneur. Born in Memphis, TN, and currently a Los Angeles CA native. Her background in film/tv has taught and shaped her passion for writing with her debut romance novel Antonio and Sabrina Struck In Love. Favorite genre to write Contemporary Romantic Suspense. Since its debut, fans have embraced the unconventional love story of Sabrina Washington and Antonio De Luca. Amazon Best Seller in Italian, African American Drama,and Multicultural Romance.

This promotion is brought to you by Pure Textuality PR.