WHISKEY UNDONE (Whiskey and Lies Book 3)
Two best friends follow a dangerous and seductive path in the final standalone novel of the bestselling Whiskey and Lies series from NYT Bestselling Author Carrie Ann Ryan.Ainsley Harris has always kept a secret from her best friend. She’s stood by his side, helped him raise his daughter, and tried to keep her distance even though she’s been in love with him for years. She knows he has secrets of his own and she’s not willing to chance what they have on a possibility.Loch Collins has hidden himself and his past from the world for good reason. Darkness always comes back to haunt those who fight against it, and he knows better than most. One night of temper, however, forces him to realize his true feelings for Ainsley—for better or worse.But Loch’s former allies aren’t on his side anymore, and now not only is his life and the life of his daughter on the line, but Ainsley is in the crosshairs, as well. Together, two best friends must fight for each other and their small town, because Whiskey has never burned brighter. And danger, it seems, is ever lurking.

Don’t forget to add it to your GOODREADS shelves!

WHISKEY UNDONE is book 3 of the Whiskey and Lies series. All three books revolve around the Collins’ brothers but can be read as standalones.

Loch Collins is the oldest of his siblings. As a single dad, he’s worked hard to provide for his four year old daughter, Misty. But he’s also depended on his family and his best friend, Ainsley, for help. Ainsley has been Loch’s good friend for ten years and she adores Misty but she’s been in love with Loch for a long time. Now, Loch’s questionable past is catching up to him and he’s scrambling to protect Ainsley and Misty. As Loch and Ainsley move towards a new, intimate relationship, will Ainsley stand by her man or will she run like Misty’s mom?

I’ve read this entire series (I’m a fan, can you tell?) but this one…oh my goodness, I FLOVED this book! I waited with baited breath for Ainsley and Loch to get together and Ms. Ryan did not disappoint. Their romance exploded almost from the very beginning. Let me tell you, I flippin’ adored both Ainsley and Loch. They had all of the traits that I love to see in my main characters. Honesty, kindness, charm, loyalty, trustworthiness, strength and a bit of alpha male goodness. Of course, it took some drama for each of them to accept their feelings for the other but once they did? SWOON! Loch and Ainsley were so swexy together (sweet and sexy).

The plot thickens with a murder mystery and enemies from Loch’s past wreaking havoc. I was reading this one while sitting with my husband during his chemotherapy and I literally had to suppress everything from little titters of laughter to gasps of surprise (and maybe crossing my legs once or twice…wink, wink). This book was a wickedly fun rollercoaster ride of emotions! It all came together to create one of my favorite friends-to-lovers story from Carrie Ann Ryan. Told from dual POVs with a sweet, sweet, sweet ever after. I voluntarily read and reviewed this book.

Check Out The Rest Of The Whisky and Lies Series! 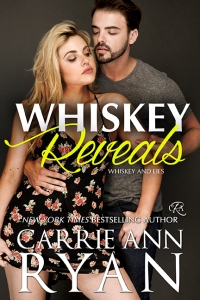