Hey y’all…I’ve got another giveaway for you! Last week, I participated in the Foster an Author program. The delightful author I fostered, Lynn Mullican, gave away an ebook of her book, Crystal Dragon (Bad Elements Book 1). Congrats to Renee G. by the way! Well, Lynn has offered TWO MORE ebooks to give away! WOO HOO!🎉 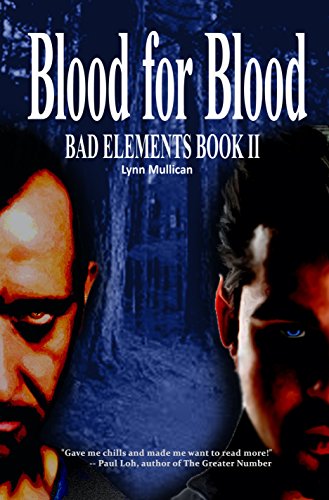 Crystal Bouchard AKA Crystal Dragon is re-united with her family after spending five years imprisoned as an underground fighter for the vampire/werewolf community. As her familial ties are woven, Crystal’s prior kidnapper, vampire Jace “J.T.” Templeton and his henchmen seek revenge on her, forcing her to make a decision that could kill her and her family. Only this time she brings a new breed to the fight.

Adapting to a normal life in the immortal realm, Crystal finds her familial ties in turmoil. As Crystal’s son becomes obsessed with a string of recent deaths, his marriage to his witch wife grows weak, forcing her to turn to her sister for guidance.

Meanwhile, Crystal’s daughter, Jennifer struggles with her immortal hormonal imbalance, attracting two teenage boys, one of whom is not what he seems.

With the appearance of her ex-husband, Wayne, Crystal becomes the target of the elite immortal agency, the Underground Secret Service, its affiliates, and its primary targets, including the notorious and dangerous biker gang, The Hell’s Changelings—her lover’s brotherhood.

Gaining some of her memory back, she discovers secrets and uncovers the truth behind her captivity, pushing her into the primary focus of annihilation by the hunters and the hunted in this sequel to the dark and edgy novel, Bad Elements: Blood for Blood.

This giveaway will be open until midnight on Friday, November 2! Good luck!

Thanks to the fabulous Lynn for donating these books! Have a GREAT day y’all!

Dominik by Sawyer Bennett My rating: 5 of 5 stars Dominik is book 6 in the Arizona Vengeance series and although it does have interconnecting characters, it can be read alone. Dominik Carlson is the owner of the new expansion hockey team, the Arizona Vengeance. He’s a self made billionaire who always gets what he wants. And he desperately wants Willow Monahan, the sister of one of his hockey players. Can Dom get the fiery Willow to hand over her heart? It’s no secret that I absolutely ADORE Sawyer Bennett. This entire series had me in its passionate grip from the beginning and this book was no exception. Dominik was sigh worthy, drool worthy, swoon worthy. I pretty much fell in love with the hot billionaire from oh…the cover! Seriously, Dom had his flaws of course but there’s something to be said about a man who goes after what he wants, a man that can acknowledge his possessive tendencies and express those without being a caveman. Willow was extremely independent, fiercely protective of her heart. I admired her free spirit so much but damn, I wanted to shake her! Hahaha, don’t get me wrong, I loved her character but her stubbornness was a little exhausting. I truly felt sorry for Dominik at times. And oh my goodness…I freakin’ love it when an author can draw these kinds of conflicting emotions from me! Overall, another big hit from Ms. Bennett! I happily added this one to my READ AGAIN E-SHELF! Told from dual POVs with a delightfully happy ending. I voluntarily read and reviewed this book. . . @sawyerbennett123 #bibliophile #bloggerstyle #bloggergirl #bloggermom #bloggersdoitbetter #booklover #bookshelf #bookworm #bookhaul #5stars #arcreview #bookreview #bookrecommendation
Just a little Friday fun!😘😏 . . . #fridaymood #fridayvibes #fridayfeeling #handsomehunk #studmuffin #fridaymotivation #bibliophile #bloggerstyle #bloggergirl #bloggermom #bloggersdoitbetter #bookboyfriend #weekendvibes #bobosbookbank
This is SO me!☺️ Question: How do you arrange your bookshelf? I tend to stack/stand mine according to author and genre! . . . #bookshelves #booklover #bibliophile #bloggergirl #bloggermom #bloggersdoitbetter #booklover #bookshelf #bookworm #bookhaul #booksonthebrain #bookalicious #bookwhore #bobosbookbank
Ummm...yes, please! Save my kitty!☺️🤣 . . . #savemykitty #hottie🔥 #hottieswithbodies #tattoomodel #badboysforlife #badboystyle #bloggersdoitbetter #booklover #bookshelf #bookworm #bibliophile #bloggergirl #bloggermom #bobosbookbank #saturdaymood
Dying for Rain by B.B. Easton My rating: 5 of 5 stars Dying for Rain is the final book in The Rain Trilogy and must be read in order. This is an apocalyptic new adult romance. I’m placing this bad boy on my BEST OF 2020 shelf! Rain and Wes find themselves in trouble yet again. They’re immediately separated and desperate to save each other. Will their love survive this new threat? Will the world survive? After a doozy cliffhanger from book 2, this one takes off right where we left it. And the suspenseful action just keeps going and going! In a world where the Mad Hatter seems sane, the drama had me biting my nails all night. This is not just a flimsy love story or even survival of the fittest…it’s about love surviving during the lowest of times. It’s about making the ultimate sacrifice for your one true soulmate. About finding your inner strength & courage, fighting for what you believe in and never giving up. This is one of my favorite kind of stories because it’s expertly character driven. No, Rain was NOT the perfect heroine, she didn’t have all the answers and half the time I was yelling at her to find her lady balls. BUT. I definitely felt like her character blossomed and grew right before my eyes! And of course, I was already madly in love with our bad boy hero, Wes, though I think his story was mostly told in book two. Wes and Rain’s romance was masterly crafted, well written and a story that I know I’ll be visiting again! Told from dual POVs with a sweet, happy ending. I voluntarily read and reviewed this book. . . @author.bb.easton #5stars #bestof2020 #readagaineshelf #romanticsuspense #badass #bloggermom #bibliophile #bloggerstyle #bloggergirl #bloggersdoitbetter #booklover #bookshelf #bookworm #bobosbookbank #bookrecommendation
Yup...its one of those days! Happy Friday y'all! 🥰 . . . #fridaymood #fridayvibes #fridayfeeling #bibliophile #bloggerstyle #bloggergirl #bloggermom #bloggersdoitbetter #booklover #bookshelf #bookworm #bobosbookbank