Hey y’all…it’s been a super busy week, sorry for the late post! Today’s FRIDAY FAVES is all about Reunion Romance. Now, when I planned this month’s faves, I thought it’d be cool to highlight stories about class reunions. You know, seeing your old high school boyfriend in a class reunion setting and falling in love again ten years later or something?? BUT, when I went back through the books I’ve read, I really could only find ONE!! Aye yi yi!! So, I kinda cheated and am going to use books that are more like second chance romance but maybe the MC had began their relationship in high school. Enjoy! 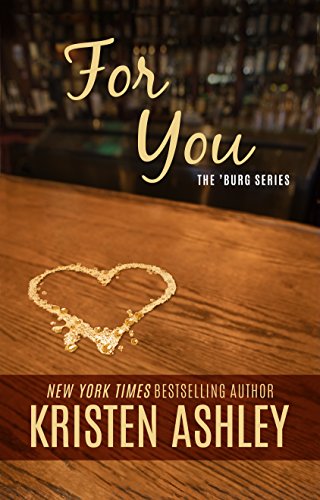 For You (The ‘Burg Series Book 1) by Kristen Ashley

Lieutenant Alexander Colton and February Owens were high school sweethearts. Everyone in their small town knew from the moment they met they were meant for each other. But something happened and Feb broke Colt’s heart then she turned wild and tragedy struck. Colt meted out revenge against the man who brought Feb low but even though Colt risked it all for her, Feb turned her back on him and left town.

Fifteen years later, Feb comes back to help run the family bar. But there’s so much water under the bridge separating her and Colt everyone knows they’ll never get back together.

Until someone starts hacking up people in Feb’s life. Colt is still Colt and Feb is still Feb so the town watches as Colt goes all out to find the murderer while trying to keep Feb safe.

As the bodies pile up, The Feds move in and a twisting, turning story unravels exposing a very sick man who has claimed numerous victims along the way, Feb and Colt battle their enduring attraction and the beautiful but lost history that weaves them together.

Rather Be (A Songbird Novel) by Melissa Pearl

Love can last a lifetime…

They used to be best buddies…and lovers, but life has led them down different paths.

Can a spontaneous road trip bring them back together for good?

Best buds in high school, Charlotte (Charlie) and Nixon were inseparable…until the summer after graduation, when things in their relationship shifted and it all fell apart.

Four years later, their paths cross at a snowbound New York airport. It doesn’t take long for them to realize that time and distance has done nothing to extinguish the flame between them.

But life has moved on.

Nixon has a girlfriend, and Charlie must face up to the lasting consequences of what she let happen that dreadful summer.

In a secret attempt to make amends, Charlie suggests a spontaneous road trip from New York to LA. As usual, Nixon can’t resist her persuasive charm, so they hit the road together. But as the duo make their way across the country, they are both forced to face some honest truths about themselves, their present lives, and all of the unfulfilled dreams they’ve let slip by.

Each of them can see the course their lives are taking…but is there someplace else they’d rather be?

If you like friends-to-lovers romance, road trips and stories of self-discovery then you’ll want to read this simmering contemporary romance.

Veterinarian, Rae Evans expects to attend a dreadful ten-year high school reunion. Instead, she’s confronted by a past she’s never gotten over. The love of her life, Travis Walker, has returned to Catfish Creek, and the now-famous rock star wants only three things: Her. Naked. And screaming his name.

Fresh off his last world tour, Travis has returned to town to get a dose of reality. With fame casting a superficial cloud over Travis’s life, he’s scrambling to stay afloat. He needs an anchor, and Rae is that for him. But as he finds himself, he’s determined to remind Rae of the heat that once burned between them.

Before they know it, their one hot night is three, and soon, just like ten years ago, Travis holds the strings to Rae’s heart. But Rae’s not that young girl who watched her high school sweetheart race off to become famous. She’s a woman who knows what she wants and realizes when a man needs her. She just has to decide if she should put the past on repeat, or walk away from it forever.

What would you give up to have a second-chance at a once-in-a-lifetime love?

Wild Card is a STANDALONE SECOND-CHANCE ROMANCE from the NYT bestselling author of The Pact and Before I Ever Met You.

Rough, raw & rugged.
As the man in charge at Ravenswood Ranch, Shane Nelson has never been afraid to get his hands dirty. His sculpted physique isn’t the product of a gym, but of years of hard labor under a relentless sun. His straightforward, alpha tendencies come from a man who knows what he wants and goes after it.
And what he wants is Rachel Waters.
He’s never stopped wanting her.
They were childhood best friends, then teenage lovers who evolved into soulmates. But on one fateful night, Shane made a grave mistake, breaking both their hearts in the process.
Now, after six years, Rachel is back in the small, wild mountain town of North Ridge, BC.
Ready to face her past.
Ready to face Shane.
Ready to face his dark secret.
But is a second-chance at a one true love in the cards? Or will their wild hearts be broken once again?
WILD CARD IS A COMPLETE STANDALONE NOVEL and the first book about the Nelson Brothers of North Ridge

He was the resident bad boy. She’s small town royalty. Their love was doomed from the start.

Finn spent his childhood living so far on the wrong side of the tracks, he couldn’t even see them through his trailer window. When he moves back to his small, southern hometown to open the first bar in a formerly dry county, he’s no longer the boy who left—he’s a man with something to prove. As long as he doesn’t allow himself to get sidetracked by the only girl he’s ever loved.

Willow learned a long time ago to protect her heart at all costs, so her walls are firmly in place when her ex comes strolling back into town, all cockiness and charm. When they’re thrown together on the job, she knows better than to give in to the tug of attraction that still simmers between them. She might be drawn to him, but she certainly doesn’t trust him. It’s time for her to prove she’s not the brokenhearted girl he left behind.

There’s no room for second chances in Havenbrook. And Willow’s daddy—the mayor—will do anything to keep it that way.

Do you enjoy reading “Reunion” romance? Any suggestions for me, shout it out in the comments! Have a good one y’all!