Return to New York Times bestseller Sandra Hill’s Cajun country, where the Louisiana bayou is steamier than ever…

Alaskan pilot Aaron LeDeux came to Louisiana with his brother to discover his Cajun roots. But any hopes he had of returning home are extinguished when he agrees to help a crew of street monks and nuns rescue trafficked girls from strip clubs, pimps, and other horrors. For the work has become his new calling.

With her harrowing past, Fleur Gaudet only feels safe at the nunnery. But when she’s ordered out into the real world to decide where she truly belongs, Fleur goes to live with the LaDeux family. Suddenly, she’s in regular clothes, thinking irregular thoughts about Aaron. With his whiskey-colored eyes and fierce bravery, Aaron is like her own personal Cajun cowboy, re-introducing her to…everything.    As the dangerous missions brings them closer, Fleur must decide if she’ll continue her path—or if she’ll have a new future with the man she’s losing her heart to.

stood in the dressing room of the Silver Stud Club in New Orleans, using a long-handled dustpan and broom to sweep along the edges of the tiled floor, all the while keeping an alert eye on her surroundings. Al- though she wore a blonde wig to hide her identity and a rather demure black nylon uniform with a white apron, as befitted her new job on the club’s cleaning staff, unlike the scantily clad women around her, she was still outside her comfort zone. Way outside!

She decided to offer up the discomfort as a penance for past—and future—sins. Mortifying the flesh, so to speak. Like that self-flagellating albino monk in The Da Vinci Code. You had to be Catholic to understand the logic of suffering in silence and offering it up as a heavenly gift.

But then, Fleur was a nun!

Well, not really like that holier-than-holy nun, bless her heart, who had lived, by choice, in abject poverty in Calcutta. In the old days, Mother Teresa would probably have worked in a leper colony.

On the other hand, a strip club was somewhat like a leper colony, wasn’t it?

Truth to tell, Fleur wasn’t really a nun yet. More like a nun-in-training, with the Sisters of Magdalene religious order. The Magdas had originated in Spain, but expanded into satellite convents throughout the world. Like the one in Mexico, with which she was affiliated, that had in recent years joined forces with the rogue order, St. Jude’s Street Apostles, in Dallas. Their mission: to rescue girls kidnapped into the sex trade. Which was why she and some of her partners were in this sleazy club tonight.

There were other females in the dressing room, but mostly they kept to themselves as they lounged or touched up make-up. None of them were the young, frightened teens they hoped to rescue, though. Not that they were old, exactly. In fact, Peaches Galore, the girl in front of her, was no more than twenty-two years old, wearing a sheer black bustier and a G-string and heels high enough to give a person a nosebleed.

Peaches was on her cell phone, presumably talking to one of her three children, all under the age of eight, that she’d told Fleur about a short time ago. “No, you cannot make a frozen pizza, Henry. You know the stove is off-limits. The microwave, too. Did Jimmy say his prayers before you put him to bed? He skipped Auntie Priss?” Peaches laughed, and murmured something under her breath about how she would skip the old bat, too. “Did you change Elisa Mae’s diaper? I don’t care if it stinks, do as you’re told. I know, sweetie. I’m sorry I yelled. Be a good boy, and tomorrow we’ll go to the park with your remote control airplane.”

It was sad, really. But the Magdas couldn’t rescue everyone. And not everyone working in this club wanted or needed rescuing.

Just then, the door flew open as a group of strippers, waitresses, lap dancers, and bar maids trooped in, laugh- ing, cursing, talking, many of them pulling five-, ten-, and twenty-dollar bills from their G-strings or thigh- high fishnet stockings. The pounding beat of that old Mötley Crüe song “Girls, Girls, Girls” could be heard through the open door, coming from the DJ station.

Also, through the open doorway, she could see the raised circular stage with its spokes leading out into the crowd, up close and personal. At any one time, a dozen girls were dancing. Another dozen would be doing lap dances in semi-private alcoves.

A regular meat factory! Ironically, that’s just what this former warehouse had been . . . a huge meat packing plant.

And none of these activities included those upstairs, which was why Fleur and her “posse” of nuns were here tonight with the Rogues.

“Gentlemen, let’s give a warm—no, hot—welcome to the next round of ladies,” the DJ yelled out. The door hadn’t closed tightly. “Chocolate Cream. Bubble Icious. Fanny Bigguns. Ms. Demeanor. Moana Bigona.”

Yep, this was a high-class place, all right.

Fleur rolled her eyes as the air compressor door finally swooshed shut, muting the club noise. Just then, she noticed one of her religious cohorts, Sister Carlotta, leaning her forehead against the wall, muttering something. Lottie was working as a waitress, not a topless one in the bar, but a regularly dressed one in the coffee shop. Her uniform was similar to Fleur’s, except shorter, and she wore the proverbial high heels. She wore a wig, too, but hers was black and cut into a straight bob. Attractive, actually.

Fleur went up to her and whispered, “Lottie, are you all right?”

Lottie nodded, then turned to face her. “I was praying. This place just gets to me. How disgusting! And sad!”

Carlotta waved the ten-dollar bill in front of Fleur and said, “A man stuck this in my blouse, then had the nerve to ask if I had five dollars in change. This place feels like hell.”

Or a leper colony. Fleur barely stifled a laugh. Car- lotta wasn’t that old—about twenty-five—but she’d been in a conventional Spanish convent since she was thirteen. The philosopher John Milton’s “cloistered virtue” personified.

Carlotta, like many other humble nuns who cherished the insular life of prayer and meditation inside the walls of an abbey, was a victim of the upheaval in all the flagging religious orders, male and female, throughout the world. The old ways no longer worked.

To celebrate the release of CAJUN PERSUASION by Sandra Hill, we’re giving away one paperback copy of CAJUN CRAZY! 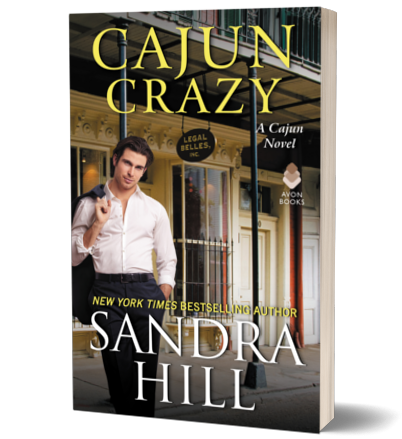 GIVEAWAY TERMS & CONDITIONS:  Open to US shipping addresses only. One winner will receive a paperback copy of Cajun Crazy by Sandra Hill.  This giveaway is administered by Pure Textuality PR on behalf of Avon Romance. Giveaway ends 6/29/2018 @ 11:59pm EST. Avon Romance will send the winning copies out to the winner directly. Limit one entry per reader and mailing address.  Duplicates will be deleted.  CLICK HERE TO ENTER!

SANDRA HILL is a graduate of Penn State and worked for more than ten years as a features writer and education editor for publications in New Jersey and Pennsylvania. Writing about serious issues taught her the merits of seeking the lighter side of even the darkest stories.

This promotion is brought to you by Pure Textuality PR.