Heartbreak led me there.
I had a mission but it didn’t take long for my grasp on reality to come loose.
As the tethers to my past were torn away I found myself inextricably bound to him, to the twisted monster.
Kane Freestone’s secret world was like the ultimate mix of good and evil.
They called him the mad genius, and he was just that.
I hated him as much as I couldn’t live without him.
During those months underground, he was the center and soul of my existence, my oxygen.

Only one person could bring me out of the haze–Detective James Maddox.

Add it to your Goodreads TBR HERE 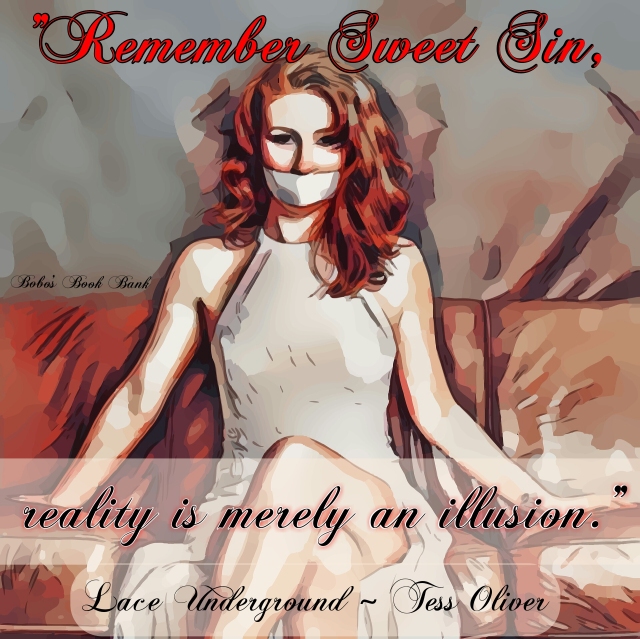 *Edited to include a review for each book!

CAPTIVE is book 1 in the Lace Underground series. This is an angsty thriller and ends in a cliffhanger!

After Detective Angie Tennyson (aka Ten, aka Tawny) learns of both a personal and a professional betrayal by her partner, Detective James Maddox, she decides to go undercover. The mission is dangerous and mysterious. But then Angie meets the enigmatic Kane Freestone. She quickly becomes his willing “Captive”. Or is she?

It’s been awhile since I’ve read Tess Oliver and I could kick myself because reading this book reminded me of why I absolutely adore this author! This story is full of angst, dark seduction, taboo wants and thrilling scenes. I was so entrenched in Angie’s tale that I literally felt my heart thumping in anticipation. The circumstances that Angie finds herself in are both scary and strangely alluring. (And I won’t explain that because I don’t wanna give anything away!)

Let’s just say that I feel like a ping pong ball, bouncing back and forth between Kane’s side and Maddox’s side. There’s a clear line between the good guy and the bad guy but somehow, I’m still drawn to the bad boy. Hmmm…what’s that say about me?!?

Just a few FYIs:
*Technically, this is NOT a love triangle, though Angie is torn between two men. *There are some situations that may be a trigger for some (drug use, homelessness).
*Again, this ends in a cliffhanger and is part of a series of three!

This book begins a few weeks after the end of book one, I believe. Angie (aka Tawny, aka Ten) is struggling with her addictions…addiction with the “nectar” and with Kane Freestone. Her partner, James Maddox is desperate to find a way into the Lace Underground. Can he save Ten before she loses herself completely?

I read this book until I finished it at around 5 a.m. this morning. I literally COULD NOT put it down! Everything about the story fascinated me…the utter craziness of the Lace Underground, the dichotomy of Kane, the struggle Angie faced, Maddox’s utter feelings of helplessness. There’s so much angst and trepidation but then there’s scenes that make you squirm or make you smile. And it all fits together like the perfect puzzle.

DEVOTED is the conclusion to the Lace Underground series and must be read last!

This book begins right after book two ends. I don’t like giving away spoilers but I’ll just say that nothing is as it seems (remember Kane’s tattoo?).

Admittedly, this book is much less intense than the first two books but I loved it just as much! Even knowing all the things that Kane did, I still had a huge soft spot for him. And, crazily, I was just as torn between Kane and James as Angie was. Tess Oliver wrote such a FANTASTICALLY character driven story that I felt myself able to completely relate to each of the characters, even the bad guy! I understood Kane, James AND Angie’s POVs and could sympathize with each of them.

The plot was just as intriguing as the characters though! I loved all of the little twists that were thrown in. But the BEST thing was how Kane’s tale gets wrapped up. It was a bit predictable but I don’t care because MAYBE, just maybe…Kane will get his own story?!?

My only complaint was the absence of an epilogue and that’s just because I’m selfish and didn’t want to leave these awesome characters and their disturbed world! Told from multiple POVs with a sexy, happy ending. I voluntarily read and reviewed this book.

Tess Oliver is the New York Times and USA Today bestselling author of the Custom Culture series and a large collection of other romances. She is well known for her relatable characters who “become your friends” as you journey with them and for intriguing stories that will have you “devouring her books in just one day”. Tess has been featured on USA Today’s ‘Happy Ever After’ site, and in publications including Glamour UK and Elle UK magazines.