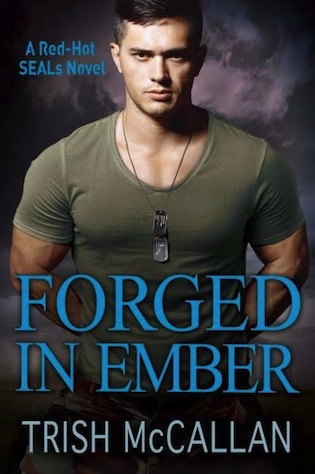 In the final novel in the scorching Red-Hot SEALs series, a desperate mother and a Navy SEAL fight fire with fire to protect their love and save the world…

Amy Chastain has made a lot of enemies—none so ruthless as the insanely powerful New Ruling Order (NRO). When they killed her husband, it was hell. Then they targeted her children by injecting them with a dangerous, experimental isotope. Now Amy trusts only one man to help her: the ex-commander of SEAL Team 7.

In the company of Navy SEALs, Jace “Mac” Mackenzie was in his physical element. Now he’s on the run from the same cabal that poisoned Amy’s children. That doesn’t stop him from launching a mission to bring down the NRO—and find an antidote. But the clock is ticking. And as the sparks fly between him and Amy, Mac realizes he has more to lose than ever before.

As Mac closes in on the NRO, he uncovers a plot that threatens more than Amy’s children. Now it’s a race against time to stop a global conspiracy, save the woman he loves, and protect the family that’s starting to feel like his.

“You can talk to him after you’ve eaten, Benji. Now skedaddle.” She waited for Brendan to herd his brother across the cafeteria floor before turning a suddenly grave face in Mac’s direction. “The boys’ doctor asked to see Amy in private, and I suspect the news is less than good. Nobody should have to face something like that alone, but she needed help with the boys, so I couldn’t stay.”

“Aren’t here. You are. The meeting with the doctor will be over by the time I find them. Amy needs someone now.”

Mac took another step back. “I’m sure Mrs. Chastain would prefer to have a woman with her.”

“The only woman available is me, and I promised her I’d take care of her children. Trust me, she’d be much more comfortable with me watching over her boys than holding her hand. Which means you’re currently the only person available to step up.” She leaned toward him, a militant look sheening her gaze.

“She’s at the clinic, Commander. Alone. She needs you.” The resolve shifted to entreaty in her eyes and voice.

He spread his feet and tensed his muscles, powering up for an uncompromising refusal. No way in hell was he taking on Amy Chastain’s troubles.

“Fine.” The surrender grated as it rumbled up his throat and out his mouth.

Where the hell had that come from?

Mac scowled, regrouping. Time to nip this in the bud and retreat to safety. “Look, I’ll check in on her. That’s all I’m promising.”

He groaned beneath his breath. Agreeing to check up on the damn woman wasn’t exactly retreating.

Grunting an acknowledgment, Mac brushed past Marion before she talked him into doing anything else. Of course, just because he’d agreed to check on Amy didn’t mean he had to do so. It would be easy enough to skirt that duty by heading in the opposite direction. Except his feet developed a mind of their own and carried him two streets to the right and through the clinic’s sliding glass doors.

Trish McCallan was born in Eugene, Oregon, and grew up in Washington State, where she began crafting stories at an early age. Her first books were illustrated in crayon, bound with red yarn, and sold for a nickel at her lemonade stand. Trish grew up to earn a bachelor’s degree in English literature with a concentration in creative writing from Western Washington University, taking jobs as a bookkeeper and human- resource specialist before finally quitting her day job to write full time.

Forged in Fire, the first book in her Red Hot SEALs series, came about after a marathon reading session, and a bottle of Nyquil that sparked a vivid dream. She lives today in eastern Washington. An avid animal lover, she currently shares her home with four golden retrievers, a black lab mix and two cats.