CARNIVAL is book four in the Traveling series and although this is a contemporary standalone, I feel like if I had read the first three, I would’ve felt MORE connected to the main character, Zef, as well as the secondary characters. Zef is a tattooed, “bad boy”, ex-con carnie who’s a whole lot older than Sara (32 to her 18). Their romance is slow to ignite, mostly because Zef is uncomfortable with their age difference. But I loved him! Oh my goodness! I’d describe Zef as the strong, silent type, maybe a bit lonely and extremely self conscious of his dark past. He’d found his place as a motorcross stunt man in the traveling carnival (SWOON!!) and I gotta say…it was so cool to get a glimpse into that whole lifestyle! I truly was in awe of how Jane Harvey-Berrick described the atmosphere of the carnival, the Ferris Wheel, the food and most of all the feeling of being part of a FAMILY. My only complaint was Sara’s character. I understood she WAS only eighteen but I found her to be so naive and childish at times. (Zef even comments on this during the book!) But Sara does mature a bit as the story progresses and I found myself liking her by the end. And speaking of the end…that was one of the most BEAUTIFULLY WRITTEN endings I’ve ever read, both sweet and profound! This one was so unique, I’ve decided I NEED to go back to the beginning and read the entire series because I want more of these enigmatic carnies! Told mostly from Zef’s POV with a few chapters from Sara and a wonderful, positive HEA. I received, read and voluntarily reviewed an ARC of this book. 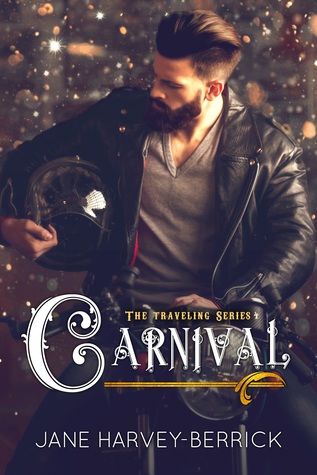 Empty inside, cold in his heart, Zef turned to whisky and drugs to fill the void.Instead, he ended up with a prison sentence and a new determination to get clean and make something of his life.

Since his release, Zef has been on the road, finding his spiritual home with a traveling carnival and working as a motorcycle stunt rider.

He doesn’t want to be tied down to anyone or anything. Fiercely loyal, the only people he cares about are his brother and his carnie family.

Until a crazy girl who’s run away to join the circus crashes into his world.
But now his old life is catching up with him, and Zef has to choose a new road.

A standalone story, and the last one in the TRAVELING SERIES.

It wouldn’t have been so bad if I’d landed on my good leg, but I didn’t, and the pain was so intense, my vision went black and all I knew was deafening silence.

I woke up a few seconds later wondering if I’d died and gone to Heaven, because the view was pretty damn good and surely an Angel was watching over me. But as my vision cleared, I realized that Sara was on her knees in the dirt next to me. I think she was screaming, but my ears were ringing so badly, I couldn’t tell.

I struggled to sit up, but she held me down by my shoulders.

Kes was next to me, lifting my visor carefully.

“Wait for the paramedics, man.”

Flames of pain were running up from my ankle to my thigh.

“I think I fucked up my knee again,” I groaned.

“Does anything else hurt?”

Kes grinned and I heard Tucker’s relieved laugh behind me. I squinted up at him.

“Yeah, Zef,” he grinned. “We’re all good. You certainly gave the crowd their money’s worth. Can you do that again?”

Then Sara screamed at him.

“Shut up! Shut up! He could have died! He’s hurt! He’s really hurt, and you’re just making a big joke of it!”

And then she burst into tears.

And she flung herself across my body, gasping and crying. I thought she was going to have a complete meltdown when the paramedics tried to pull her off me.

“Sara, honey,” I gritted out while my whole body felt like it had been run over by a charging rhino, “they’ll do a much better job of getting me onto a stretcher if you climb off of me now.”

She stumbled back, wiping her eyes and nose as I helped the paramedics get me onto the stretcher.

The crowd was on their feet, expressions of interest or horror, depending on how macabre they liked their shows, so I gave them a quick wave and heard applause and cries of relief.

“We’ll see you at the hospital,” Kes called after me.

I gave him a thumbs up, then relaxed back on the stretcher, my knee throbbing like a mofo. Sara was walking next to me, still crying, so I lifted up my gloved hand and she clung onto it as if it would save her from drowning.

But waking up and seeing her sweet face, thinking it felt like Heaven, I wondered if I was the one who was drowning.

Writing is my passion and my obsession. I write every day and I love it. My head is full of stories and characters. I’ll never keep up with all my ideas!I live in a small village by the ocean and walk my little dog, Pip, every day. It’s on those beachside walks that I have all my best ideas.

Writing has become a way of life – and one that I love to share.

To keep up-to-date with new books, special offers and chances to win ARCs, please sign up to my newsletter – I won’t inundate you, just let you know when something interesting is happening! Like…